Thinking Inside the Box

It's another new video to help you put more strength in your skill set when it comes to lighting and creating stunning images. But in all honesty, this isn't about lighting anymore - it's about getting inside Bob and Dawn's heads.  Watch the whole series.  Over and over again you'll see the thought given to each image, each lesson in lighting made possible because Bob has spent his life getting to know every aspect of his gear and understanding how to create a "wow" print.  Seriously, who would even think of using an aquarium to create the image?  This is great stuff, but should include a warning, "Don't try this at home - these people are trained professionals!"  LOL         Skip Cohen

It's a new video thanks to Bob and Dawn Davis, this one taking you from capture right through to the final image. I love the diversity of each of these videos and especially how much they share in the next eight minutes.  Skip Cohen

A different twist to Bob's usual "how-to" style in his lighting videos, but it's so relevant. His comment with the video pretty much says it all.

"What do you do to break out of your routine and ignite your creative vision? I hope this weeks WTF inspires you to go out and shoot something completely outside your comfort zone. I find this always recharges my passion, variety is the spice of life."

From special projects to just going out and shooting for the day, the challenge is knowing when you need to simply recharge your battery. It's important for you to keep the flames of passion for the craft at their maximum, even when you're shooting something that pays the rent, but doesn't necessarily give you a lot of creative freedom or fulfillment. 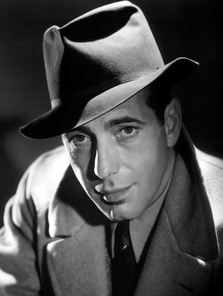 A Hurrell image of Humphrey Bogart
It's another episode thanks to Bob Davis and his WTF series. Bob's advice as always is stellar:

"Don't be afraid to use hard light, all the great B&W movies used it, George Hurrell used hard lighting for his Hollywood portraits, it takes practice, but it's worth it. This concept shoot was done in a hot tub using three Canon 600EX RT Speedlights and Rogue grids & blue gels to create this cool look."

Bob referred to George Hurrell.  Check out this gallery of George Hurrell's images. The lighting is spectacular.  If you want to raise the bar on the quality of your own work - practice all of Bob's suggestions from each video and keep working towards maximum diversity in your skill set so you can match the needs of each different client.

Survival isn't about the fittest, it's about being the most creative!

Before winter is over, it makes sense to make sure as many photographers as possible watch this video.  This lesson focuses on location lighting in a bone chilling environment, cold, wind, light snow. Using two Canon bodies, a 1DX and 1Ds, with a 16 - 35mm and 70 - 200mm zoom lens. The 1Ds is converted to shoot infrared black & white. Light modifiers were the Westcott Halo from my Perfect Pair Lighting Kit, Rogue XL Flash Bender with a strip light modifier and a Ray Flash ring light modifier. All the Speedlights were Canon 600EX RT controlled by the STE3 Speedlight Transmitter. Let me know your thoughts and share some of your WTF moments.

Part 2 of the IUSA Show

Five speedlites to light up "Lorenzo". This is great stuff and as Bob says in the beginning, it's the slow season and a great time to practice. Pay close attention to Bob's tour of his gear for the shoot. He does a terrific job of sharing what he's using and why.

A Lighting Tour of the January IUSA Show

Bob Davis is all about lighting.  Of course he's an artist, a Dad, a husband and a good friend to so many people in the industry, but when it comes to how he thinks about his images, it's about seeing and understanding the light. This video from his WTF series is a kick because he's essentially taking us on a ten minute tour of PPA's IUSA show this past January. Bob's joined by a whole group of industry icons in this episode.

It's another terrific lesson in lighting thanks to Bob and Dawn Davis. In this mini-webinar he'll take you through all the key features of working with Speedlites. Bob is a Canon Explorer of Light and an outstanding instructor. His WTF (What the Flash) series is going to be available over here on the SCU site, making it even easier for you to stay on track with his weekly online workshops.  Bob and Dawn will also be joining us in Chicago this summer August 11-14 for SCU's summer session.

The Perfect Pair with Bob Davis

It's another dynamic lesson in lighting thanks to Bob and Dawn Davis. This is about using lighting modifiers and the difference between quality of light versus quantity of light. Bob and Dawn will be joining us at SCU's summer session in Chicago in August. Stay tuned for more information later in March.

Off Camera Flash with Bob Davis

There's a lot of information packed into the next sixteen minutes with this first episode of Bob and Dawn Davis' What the Flash series! And if you're looking for more great information and support on lighting check out Bob and Dawn's Facebook page or their on line courses and newsletter.
Join Bob and Dawn at SCU's Summer session, August 11-14 when they'll be teaching lighting live, More information coming in mid-March in the SCU Event Center.

New photographers and even a few seasoned veterans now and then, forget they don't have to wait for that late afternoon "sweet light". If you know what you're doing you can create it yourself. This new video is part of a trifecta with a podcast and guest post from SCU faculty member, Bob Davis!  There's so much information packed into the next six minutes! If you're looking for more great information and support on lighting check out Bob and Dawn's Facebook page or their on line courses and newsletter.