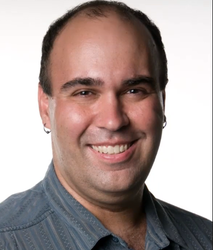 "What advice would I give new photographers and videographers? We live in a world that is getting increasingly cluttered with confusing messages. We must communicate… motivate… create."

This section of the faculty galleries really isn't about short bios, but I got such a kick out of things I read about Rich, that I wanted to share some of them with you.  He's our Dean of Video/Fusion for a reason.

When Rich was seven, he was grounded for using magnets to rearrange the picture tube on the family’s 13-inch color TV (it works but don’t try it). He has since gone on to many more interesting adventures.

After a decade of working in the graphic design and video industry, he set off to found his own group, RHED Pixel. His goal was to harness the new generation of digital video tools to bring high-quality media production to a broad audience. In 1999, Richard Harrington Video opened its doors, offering video production, multimedia, and consulting services to a wide range of clients. The company was rebranded RHED Pixel (after Richard Harrington Electronic Design and Pixels, the digital building blocks) a short time later.

He has written and co-authored over 40 books. On the top of the list of favorite things to do, besides traveling and lecturing...teaching his kids the joys of science fiction and comic books. If it involves pop culture, you can bet Rich is plugged in. Gadgets and gizmos? He's your guy.

He's a phenomenal teacher and did his first program for SCU at the Thrive Conference in Las Vegas last March. He's also a great guy to grab dinner with, but definitely order extra fries!