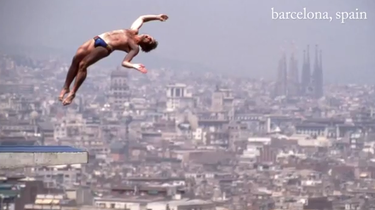 From SKYLINES, Copyright Lou Jones, All rights reserved.
Over the years on at least three different blogs I've had guest posts from photographers who have talked about the importance of personal projects. It's a really easy concept, but it surprises me how many artists get so caught up in the challenges to build their business that they miss it.

Personal projects help you fan the flame of passion when your core business is just about revenue. Everybody has something that hooked them in the very beginning to be a professional photographer, but over the years it's been a fight to not let life get in the way. Too often the reality of all the challenges pulls people away from the creative side of being a photographer.

This new video by one of SCU's  newest faculty members, Lou Jones, is just that kind of project. Lou sent me the following email:

"After nine months my studio has finally finished our latest video, SKYLINES.  All my career I've photographed the skylines of the cities I've visited all over the world. Talk about a long term project! Many were on assignments, but all were a labor of love."

No matter what you're shooting for your core business, and even if you love it, work on finding one special project to build on. You don't need to know what you're going to do with it - just start building images with a theme that's important to you. When the timing is right you'll know what to do. In the mean time it'll help keep you grounded and focused on what's most important, keeping a smile on your face.

The fun of this industry for me personally is my network. I literally just got off the phone catching up to Lou Jones. I first met Lou in the late 80's.  Year after year we bump into each other at a convention and it's as if our last conversation ended with a comma. We pick up right where we left off.

This video is behind-the-scenes with Lou on his shoot of concert pianist Paul Carlson. Included in the video is an excerpt of Carlson's talent from his newly released album at the time: Charles Ives, Piano Sonata 1, Ruth Crawford, Preludes. There's so much you can start to learn by watching a short video like this. When it's done check out Paul Carlson's site through the link above. It's a great CD cover, but it's even better as a website page!

Lou's hitting the road with an outstanding lecture series starting February 21 in New Hampshire. If you can be in the area, I can promise you won't be disappointed! You can also keep up with Lou at his site/blog where you'll be able to pick up the schedule for his other programs.

Lou Jones and World of Photography TV from the 80's

Here's a classic as Lou Jones talks about the technique of dragging the shutter from the old World of TV series. This stuff is such a kick to watch. Think about how much technology we all take for granted today.